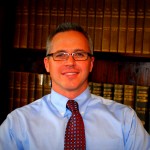 Rev. Chris Gordon, May 6, 2012
Part of the 1 Samuel series, preached at a Sunday Evening service

12And there ran a man of Benjamin out of the army, and came to Shiloh the same day with his clothes rent, and with earth upon his head. 13And when he came, lo, Eli sat upon a seat by the wayside watching: for his heart trembled for the ark of God. And when the man came into the city, and told it, all the city cried out. 14And when Eli heard the noise of the crying, he said, What meaneth the noise of this tumult? And the man came in hastily, and told Eli. 15Now Eli was ninety and eight years old; and his eyes were dim, that he could not see. 16And the man said unto Eli, I am he that came out of the army, and I fled to day out of the army. And he said, What is there done, my son? 17And the messenger answered and said, Israel is fled before the Philistines, and there hath been also a great slaughter among the people, and thy two sons also, Hophni and Phinehas, are dead, and the ark of God is taken. 18And it came to pass, when he made mention of the ark of God, that he fell from off the seat backward by the side of the gate, and his neck brake, and he died: for he was an old man, and heavy. And he had judged Israel forty years. 19And his daughter in law, Phinehas' wife, was with child, near to be delivered: and when she heard the tidings that the ark of God was taken, and that her father in law and her husband were dead, she bowed herself and travailed; for her pains came upon her. 20And about the time of her death the women that stood by her said unto her, Fear not; for thou hast born a son. But she answered not, neither did she regard it. 21And she named the child I-chabod, saying, The glory is departed from Israel: because the ark of God was taken, and because of her father in law and her husband. 22And she said, The glory is departed from Israel: for the ark of God is taken. (KJV)